Back to School at Don Bosco Preparatory High School 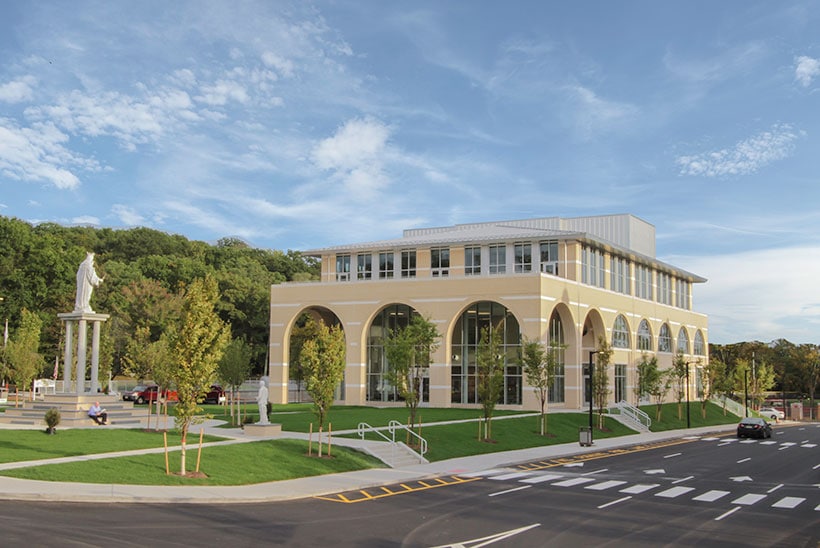 Welcome back to school! It has been one successful year since students at Don Bosco Preparatory High School began using the new facilities designed by MGA&D. The new buildings and landscape transformed the center of the campus from a parking lot to a collegiate-style quadrangle defined by existing and new buildings on all sides. It took several steps to get there, starting with a comprehensive master plan for the 35-acre campus.

Because we started with a comprehensive phased master plan for the campus, our building strategy produced the greatest immediate impact and value, and a clear framework for the future.

Don Bosco knew that they needed to expand dining facilities and classrooms housed in Immaculata Hall, an older building in need of renovation. Since renovating a crowded occupied building would impossibly compromise the school’s operations, MGA&D proposed a campus-wide master plan that concluded a new building produced the best economies and efficiencies Phase 1 interventions within the central 11 acres resolved outstanding issues with vehicular circulation, wetlands, and stormwater detention. Relocating parking was key to clearing the way for a new building site. 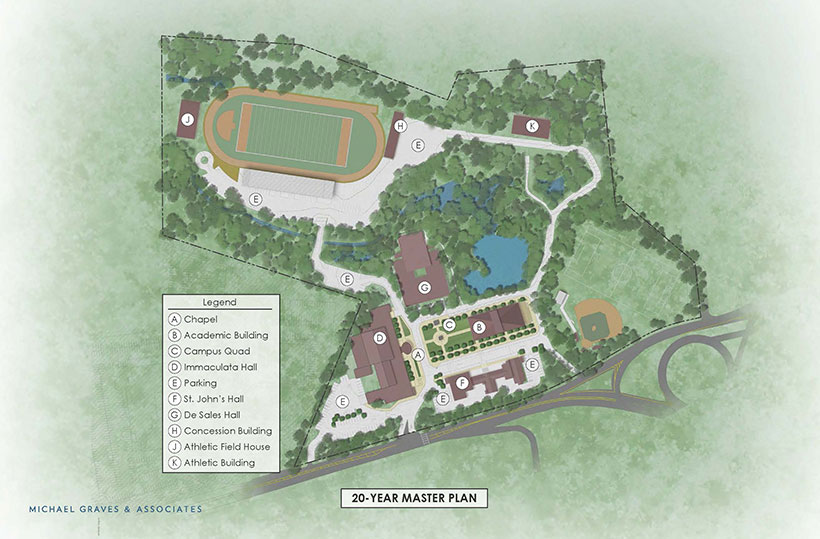 Savio Hall, a new 32,000-SF building, with new dining and kitchen facilities and 2 upper levels containing 16 well-lit classrooms, completes the fourth side of the academic campus and defines the new quadrangle. Third floor terraces overlook the campus and surrounding hills.

The form and articulation of Savio Hall draws on the traditional architecture of the adjacent 1915 landmark St. John’s Hall, balancing the rhythmic forms and proportion and scale of the brick arches with strong sense of transparency from the large expanse of glass. The glazed double-height dining hall acts as an extension of the outdoor quadrangle, enlivening both spaces. 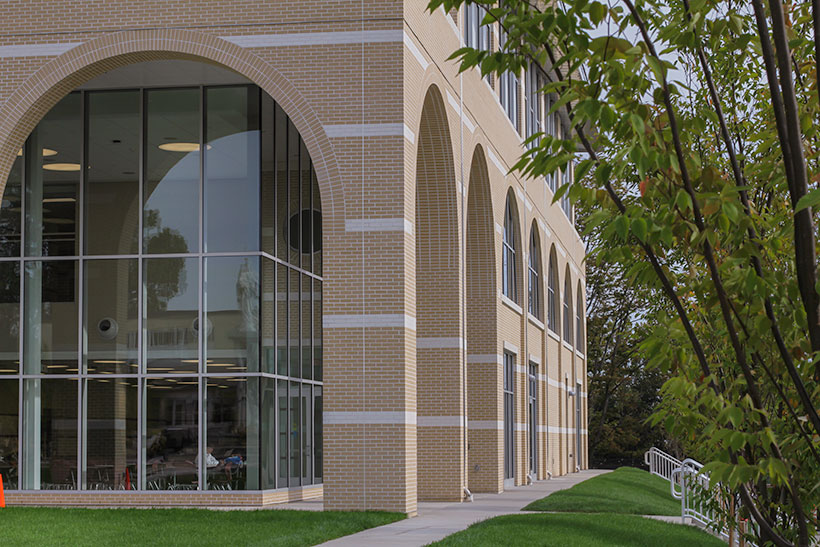 Replacing a former parking lot, the new quadrangle visually and physically unites the central buildings and becomes a hub for student activity. Its formal axis connects the dining hall in Savio Hall, the Founder’s statue and the new Sacred Heart Chapel, providing a sense of community and purpose.

Abundant natural light in classrooms and views of nature are known to enhance students’ ability to learn and their sense of wellbeing at school. 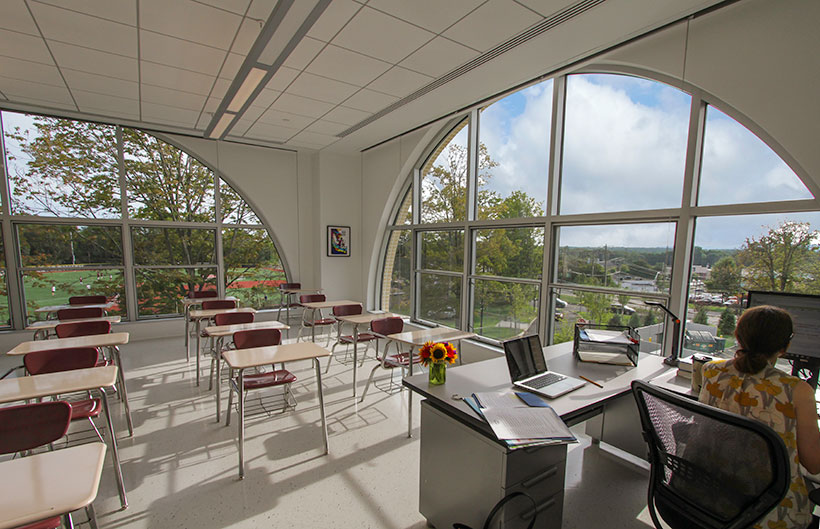 Sacred Heart Chapel is a 1,500-SF addition to Immaculata Hall on axis with the Founder’s statue and Savio Hall. Inspired by the scale and form of Tuscan hillside chapels, it rests on a stepped plinth and raised linear plaza for social gatherings.

The large colored glass windows and crosses clearly define the chapel’s purpose at the heart of the campus and the school’s mission. 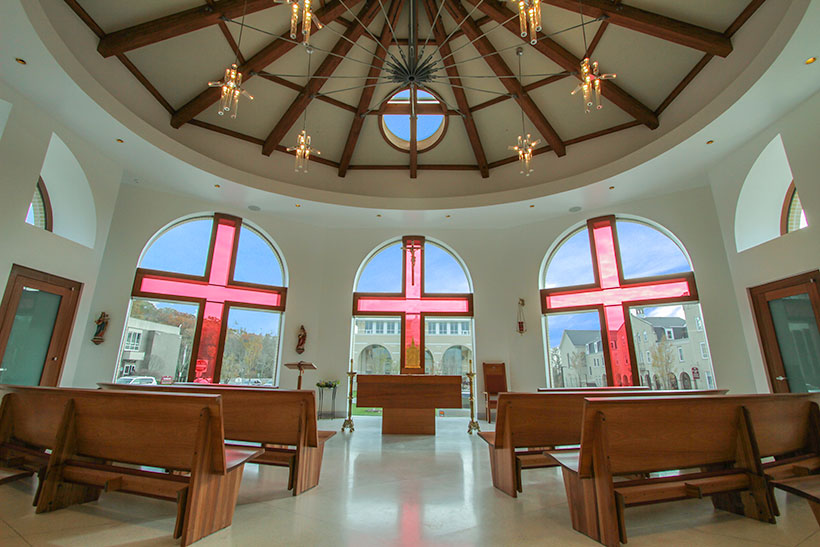 Throughout the process, we worked with the Board of Directors on fundraising strategies and provided branding, renderings, a fly-by video, a campaign marketing video, and donor recognition. Because of the thoroughness of our planning and concept design, and our sophisticated digital modeling tools, our renderings are often hard to distinguish from the finished building. This is powerful for fundraising, allowing our clients and their donors to visualize the results.

[…] Our renderings are often hard to distinguish from the finished building. This is powerful for fundraising, allowing our clients and their donors to visualize the results.

With the initial transformation of the campus complete, future phases will include renovations to the existing buildings and eventually, a new fieldhouse for the school’s distinguished athletics programs.