Book Your Stay at a Michael Graves Original 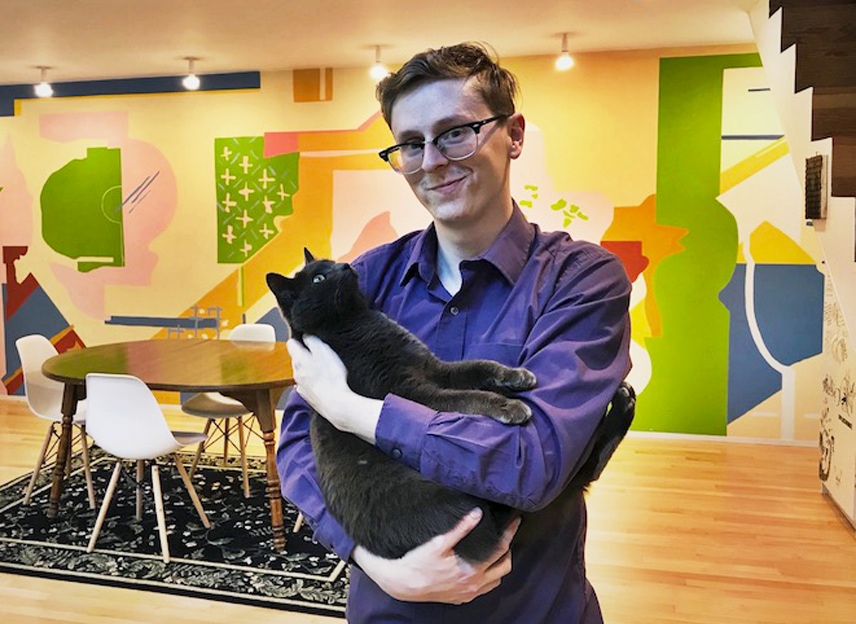 For the first time in history, you can reserve your stay at an original Michael Graves-designed house with just the touch of a finger. That is, if you’re willing to travel to Fort Wayne, Indiana. The iconic Hanselmann House is officially on the roster of the popular home rental website, AirBnb. The house was purchased in 2017 by Evan Mulvihill, a musician and artist. He saw it as an amazing find in an otherwise traditional neighborhood of ranch-style houses. When we caught up with Mulvihill in a recent interview,  he said that he surprised himself with the purchase. A first-time home-buyer, he remembers waking up the next morning with a disturbing feeling of uncertainty, but he never looked back. Now he calls his purchase – renamed the Cube House — “the best decision I ever made.”

So far, the rental business is running smoothly, as the Cube House is frequently booked. Since it can accommodate 16 people, its renters are often groups. It has hosted bachelor and bachelorette parties, basketball teams, art shows, photo shoots, DJ events, and more. It has gained popularity because of its novelty since there are no other venues or homes like this in the area. “The best decision I ever made.” – Evan Mulvihill As a design firm, we are happy to hear that its visitors are attracted to the Le Corbusier- inspired modern architecture of half a century ago. One of Mulvihill’s (and our) favorite features is the wall mural that was designed and hand-painted by Michael Graves. “Guests love finding different elements in the mural which include a winding stream that runs through the property and the Hanselmann’s cat. I love the way our guests actually pause to stop and appreciate it. They don’t just take a glance and pass by,” says Mulvihill.

The house was originally commissioned by Lois Hickman and Jay Hanselmann who dreamed of having their own custom house designed by their high school friend and soon-to-be-famous Michael Graves. Because of their low budget, they actually built it themselves. The original design was conceived as two cubes, one open, framed by a gate that was never built, and one enclosed, which is the house as we know it today. Graves thought that the house would be experienced as a progression of planes that become more and more dense until they reach the mural on the living room wall. Graves thought that the mural’s colors and allusion to natural forms, would imply extension into the landscape beyond. Completed 50 years ago in 1969, the house was one of Michael Graves’ first built works.

As a design team, we were so pleased to hear that the house has been kept as original as possible and is being experienced by the general public. We were delighted when Mulvihill informed us that he intends to use the revenue from renting to contribute to the building’s preservation and possible build-out of portions that were never realized. Its popularity as an event venue is a testament to the enduring quality of Michael Graves’ design. We recommend booking your stay today!

Check out “The Cubed House” on AirBnb today