Giving Back: Two Designers with a Community Focus 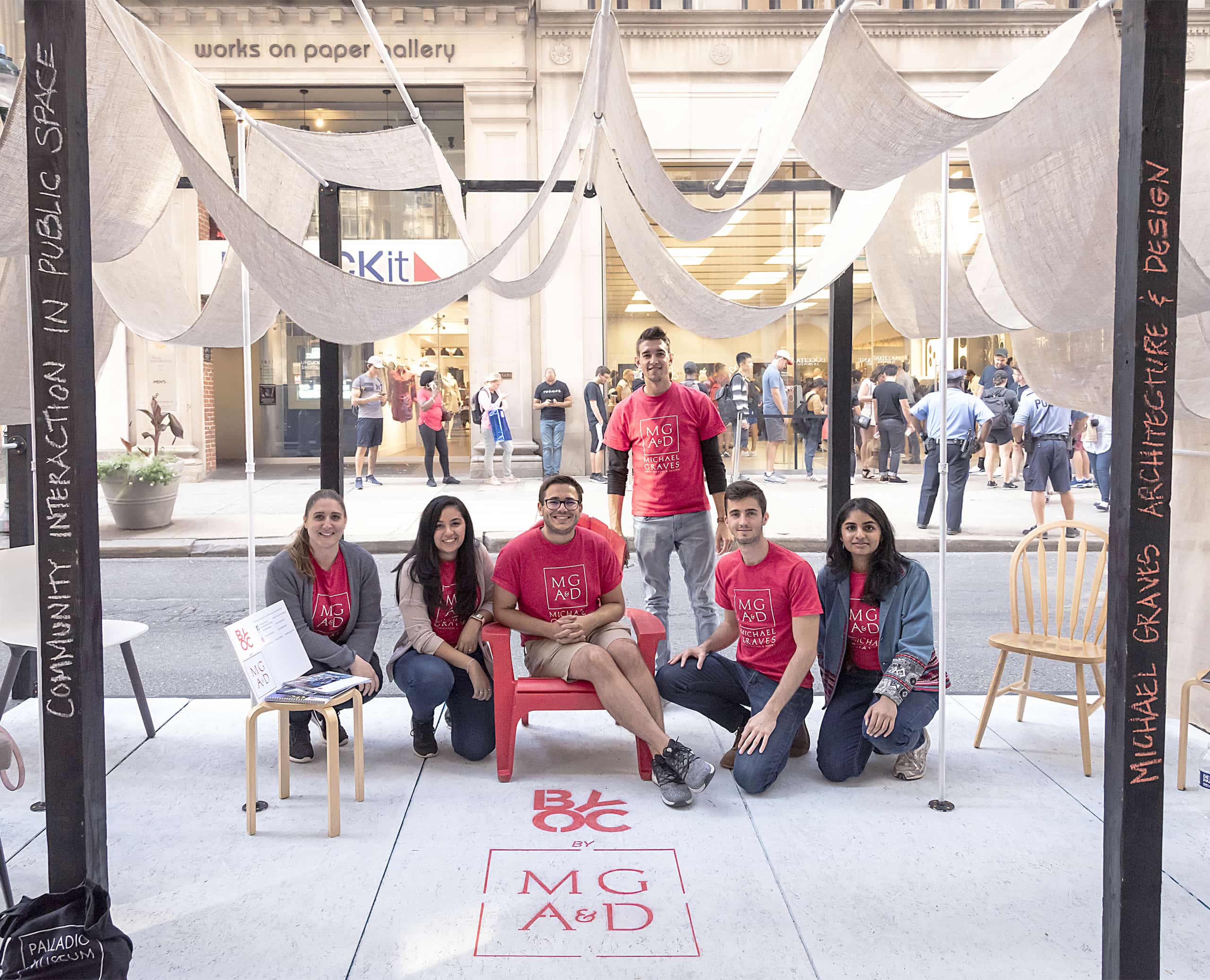 Austin Crowley and Kevin King have worked closely together  since they started at Michael Graves Architecture & Design in June 2016. Austin had just been hired full-time as an Architectural Designer and Kevin, then a student, was here just for the summer. In their first week, they joined a multidisciplinary team participating in a summer design charrette led by firm Principals and Associates. The charrette – now in its fourth year – has always focused on community. Previous projects explored  aging in place and awareness of homelessness, among other community issues. This year, the project took a different tack as Austin and Kevin took the lead in organizing and running the project for the 2019 summer interns and new hires.

Under Kevin and Austin’s guidance, five aspiring architects and interior designers were asked to rethink the way we use public space in our cities by exploring two unique, yet interrelated studies. The first was inspired by a nationwide event known as PARK(ing) Day, started in 2005 by Rebar Art and Design Studio in San Francisco to bring awareness to the extraordinary amount of a city’s public space that is dedicated to storing private vehicles.

“It was definitely a unique perspective, getting to give to this year’s cohort of young designers the opportunity that the firm’s leadership gave to us when we started working here.”  Kevin King, Assoc. AIA 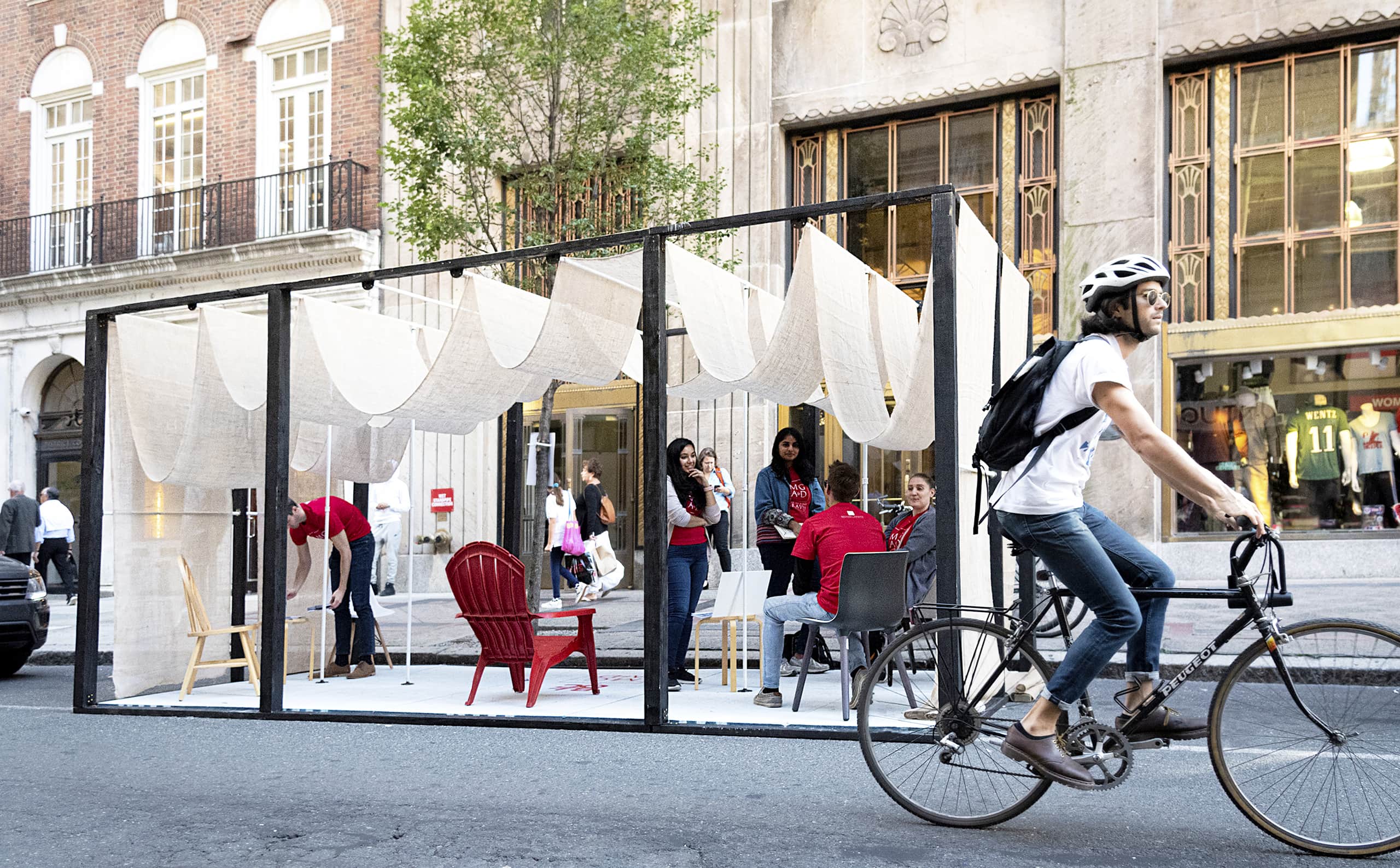 While installed for only one day, the project  took significantly longer than one day to design, plan, and execute. The team spent lunch breaks, nights, and even weekends designing, prototyping, and eventually assembling it on site. Kevin and Austin, inspired by the Principals and Associates who led them in their own charrette, defined the deliverables and deadlines and helped organize presentations to the firm, while  allowing the team to self-organize and “own” the process. “Upon thorough external research, we organized several firm-wide charrettes and brainstorming sessions to bring as many perspectives to the table as possible,” mused Austin Crowley.

“It was exciting for the young designers to see the end result develop as a company-wide approach, rather than one individual’s approach.  This allowed for design innovation.” Austin Crowley 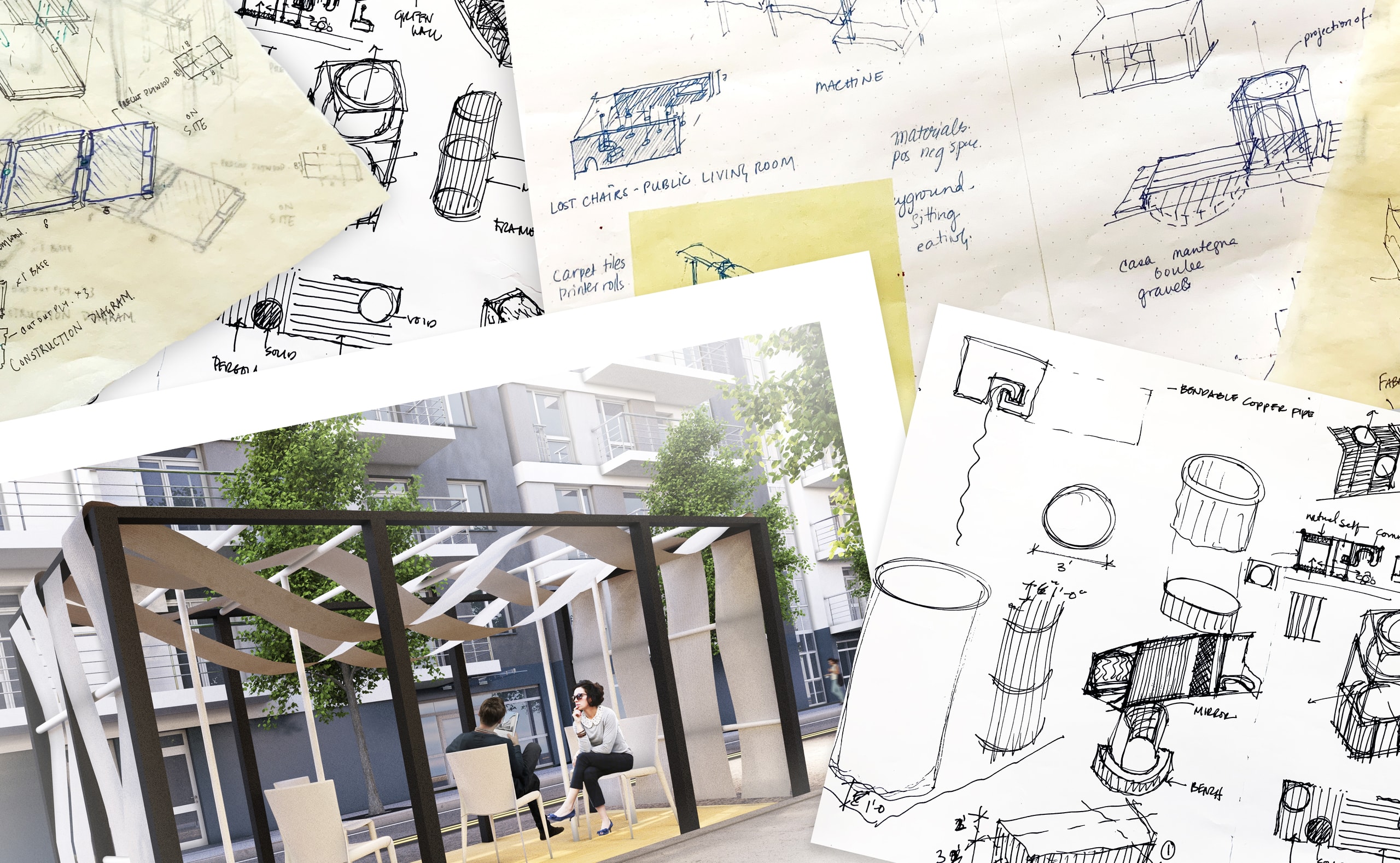 The team had three months to research, design, and build their installation before the summer interns had to return to school. In true Michael Graves fashion, the team quickly got to sketching – on lots of yellow trace. To inform the designs, Austin and Kevin walked the group through downtown Princeton to observe Princeton’s public spaces and interview pedestrians. One of the biggest takeaways was that everyone uses public space differently, so allowing for flexibility of use was paramount to creating a successful installation.

“Understanding how people use space is at the heart of how we design here,” said Kevin. “If we hadn’t done observational research, we would have been designing in a vacuum, and that doesn’t benefit anyone.”

Kevin and Austin thought it was important that the team think about the project as more than just a single-day installation, perhaps, possibly in the form of a more permanent parklet installed in Princeton or elsewhere. Time and longevity are important factors in any design, but the temporal nature of this space required creative design thinking to be flexible in use, in location, and in time. The two Architectural Designers were able to impart their knowledge to the interns and new hires to help achieve a solution which was achievable in the time frame and budget, but could be easily rethought into a more permanent, longer-lasting installation.

The installation, completed in late September in Philadelphia, was successful in its design, but also in the conversations it spurred about our public spaces. The team welcomed visitors from many walks of life — businesspeople, passersby, and even Philadelphia Parking Authority employees, who were surprisingly welcoming of the PARK(ing) Day event. For Austin and Kevin, the interaction with the community and the conversations fostered by the design were in some ways even more important than the design itself.

“It’s important to get people talking,” reflected Kevin. “We had really interesting conversations with an assortment of people who took time out of their day to sit down with us in our little urban living room, speak about their perspective on public space. It’s interesting to hear from non-designers on the ways they envision their environments.”

Austin added, “Research is the basis of our profession as designers. We felt that the only way to create a successful public space was to spend time interviewing the community, collecting data and mapping, and from there beginning to formulate ideas. We did not want to  force premature design decisions without creating  a dialogue with end users.”

After the installation day, Austin and Kevin led the study group in reflecting on their experience and refining their design based on community interactions and feedback. This became a springboard into a second study of urban public space, this time taking lessons learned and applying them to multiple locations around the world.

“Research is the basis of our profession as designers.” Austin Crowley

Though the summer interns had returned to school by this point, the full-time employees graciously volunteered to continue with this second study, creating a robust digital presentation exploring the installation of covered, urban living room spaces like the team installed in PARK(ing) Day (Stay tuned for more information on this research project.)

For Kevin and Austin, holistic, humanistic design is nothing new – we do this at Michael Graves every day. However, getting to give back to the Michael Graves community by leading the charrette, and in turn manifesting that charrette into a community project benefiting cities at large – that was a truly unique experience, and one for which they are both thankful.

We encourage you to reflect on your own perceptions of public space, and of the communities around you, this holiday season. We wish you a happy, healthy Thanksgiving.

Tags: summer charrette, PARK(ing) Day, giving back, Thanksgiving, community, philadelphia
Like What You Read?
Subscribe to receive updates from MGA&D by submitting your email below.
Share
Related News
News
2019 PARK(ing) Day Philly
Learn more about MGA&D's team or just ask us a question.
Meet Our Team
Contact Us