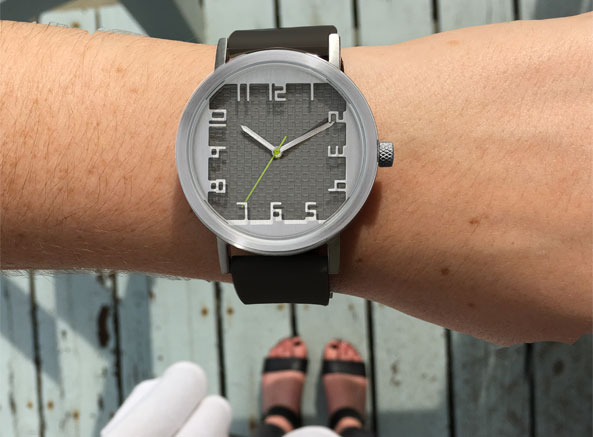 Introducing “MADO” – our most recent design for Projects Watches. The Japanese word for window, MADO was selected as the name because the design becomes a perfectly proportioned window through which time may be viewed. Donald Strum, Principal of Product Design for MGA&D, shares the inspiration behind the design and how his team brought it to life.

The Projects Watches tagline: “Architecture you can wear” celebrates the importance architecture and design play in an individual’s everyday life and is a vision MGA&D embraces wholeheartedly. This shared philosophy is what fueled MGA&D’s 30+ year relationship with Projects Watches which began with the “OH Watch”, named for its resemblance to the letter “O”. It quickly became recognized as a classic design at an affordable price; an excellent example of the democratization of design the late Michael Graves and the firm embraces.

Over the ensuing three decades, MGA&D has designed many important watches for Projects Watches, each uniquely inspired, yet all addressing form, function and feeling to create timepieces with both purpose and personality.

Our most popular and enduring product designs are those that strike people’s senses.

MGA&D’s designers recognize the importance of grounding their designs in the familiar so that an individual can connect on an emotional level. “Our most popular and enduring product designs are those that strike people’s senses. Just look at how popular the Alessi teakettle family remains,” adds Strum. “When we begin to design, we look inward and call upon what I refer to as our collective ‘amalgamation of memory’ for inspiration.”

For MADO, Strum recalled a vivid memory from his youth. “As a kid, I was enthralled with Formula One racing. I can remember Steve McQueen wearing this cool Heuer Monaco watch in the 1971 movie classic Le Mans. I desperately wanted one. What stuck with me then and stayed with me throughout the years was the juxtaposition of the square face with the round dial.” That was the first kernel of inspiration for the MADO watch.

“Originally we wanted MADO to express a solidity of form inside and out – as if it were chiseled out of an ingot of steel. Our second source of inspiration came from something very close to us: a picture frame we designed for the Target Collection featuring an unusual chamfered edge on only two sides of the frame. Ultimately, the milled hunk idea became tricky to manufacture and we had to go back to the drawing board, as they say.”

The design for MADO began immediately following the successful launch of MGA&D’s Scallop watch for Projects Watches, which is featured on the cover of MOMA’s 2016 holiday catalog. MADO’s design took note of the Scallop Watch’s Guilloche (pronounced gē-ˈ(y)ōsh – [rhymes with brioche]) dial engraving technique used in fine jewelry and Faberge eggs dating to the 17th century. When viewed side-by-side, Mado and Scallop present a yin-yang / male-female dichotomy of time.

“We invested a significant amount of effort figuring out how to economically manufacture the Guilloche pattern and we wanted our next watch to utilize the Guilloche technique as well, only this time with a more industrial look and feel,” shares Strum. “I was enjoying my morning coffee when I Iooked down at the cup in my hand and was inspired by the weave-like pattern of the cardboard sleeve surrounding the cup. Voila! Inspiration for the look and feel of the watch face!”

If you look closely, you will see that it forms a quasi-running bond pattern

“Our initial concept was to use the Guilloche technique with the weave pattern running vertically but something was not visually cohesive,” explains Strum. “And then we rotated it 90 degrees and the watch dial began to flow and compositionally ground the entire watch. In terms of detail, if you look closely, you will see that it forms a quasi-running bond pattern that was one of Michael’s favorite design elements.”

MGA&D has designed several watches with square faces; however Director of Product Design, Yuka Midorikawa shared that watches with a round face are more popular than watches with a square face. By placing the square black dial, with its unique engraving pattern, into the circular brushed stainless steel bezel, the watch transforms separate circle and square forms into a connected duality. The watch dial is punctuated by high-contrast, brushed stainless steel stamped numerals (taken from a drawing found in Michael Graves’s sketchbook) that appear to hover within the crystal lens; with the hands marking time just below them.

The “square peg in a round hole” idiom is a fitting description for the MADO watch because it artfully communicates the individuality that we all yearn to express. When seen on a wrist, the design offers a fresh three-dimensional approach to the act of telling time. Time becomes immediate, focused, and magnified.