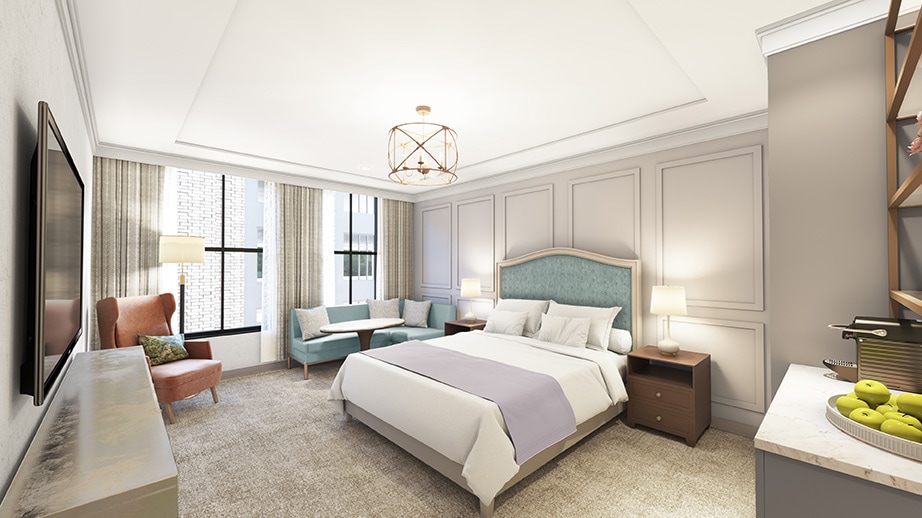 A new 50-room hotel in Charleston’s French Quarter neighborhood is taking bookings for the fall.

The Loutrel at 61 State St. was “inspired by Charleston’s public and private gardens,” according to the property’s website.

The name came from that of a well-known landscape architect, Loutrel Briggs. Born in 1917 in New York, he opened his Charleston office in 1929 and worked in the Holy City for about four decades. Briggs designed private gardens, like the one at the William Gibbes House on South Battery.

According to a 2010 book on “Charleston Gardens and the Landscape Legacy of Loutrel Briggs,” he is credited with designing more than 100 private gardens in the city’s Historic District alone.

Briggs also contributed to the area’s public landscape. He designed the Garden Club of Charleston‘s original Gateway Walk, which takes visitors through the graveyards and gardens of historic Charleston.

In keeping with its gardeninspired aesthetic, the hotel that bears his name is going to be decorated in a green color palette. The Loutrel’s “Veranda Lounge” is meant to feel like a Southern porch that’s been moved inside, complete with a porch swing, lots of greenery and a piece by Charleston painter Linda Fantuzzo. With bronze and wood accents, the bar in that space is meant to “mimic a ship,” according to a spokesperson for the new property. The hotel’s guests-only “Clubroom” will be stocked with games like chess and parcheesi and serve complimentary snacks and beverages. Guest rooms will have “a curation of local snacks,” according to the website. A rooftop terrace and bar will top the building, which is right down the street from the historic City Market.

Like The Spectator Hotel next to it, The Loutrel is part of the portfolio of the Charlestonbased hospitality firm Charlestowne Hotels. Other local lodgings managed by Charlestowne include the French Quarter Inn, Meeting Street Inn and HarbourView Inn, which is nearly finished with a $1 million interior improvement project.

Charleston’s Board of Architectural Review granted permission to demolish the one-story restaurant building. Construction on the hotel began in 2019. The Loutrel is the second lodging debut announced on the peninsula so far this year but the first that’s adding new rooms. Late this spring, The Ryder Hotel opened at the former King Charles Inn on Meeting Street. That property kept its same number of guest rooms, 91, but changed nearly everything else, from the look and setup of the hotel itself to all of its branding. That debut also included a new bar and restaurant, called Little Palm.

Similarly, the last hotel to open on the peninsula prior to The Ryder was in an existing hotel property. A former DoubleTree near the City Market was completely redone and rebranded as Emeline, which last week marked one year since opening. The earliest bookings available on The Loutrel’s website are for Oct. 1. Listed rates start at $429 Sunday through Thursday and $609 on Fridays and Saturdays.

Tags: South Carolina, Charleston, Hotel, hospitality, Interior Design
Like What You Read?
Subscribe to receive updates from MGA&D by submitting your email below.
Share
Related News
Blog
5 Ways to Improve Your Live-Work Space Right Now
News
More than a Room with a View: Biophilia and the Hospitality Experience
Blog
Away from Home: Designing the Hotel Experience
General
MGA&D at Design Connections
General
St. Regis Cairo Among Marriott’s Luxury Brand Opening in 2018
Learn more about MGA&D's team or just ask us a question.
Meet Our Team
Contact Us