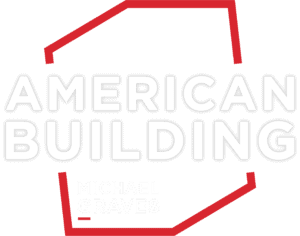 Listen on any of the major podcast streaming platforms including:

The second guest on the American Building series is Samer Hanini. Samer is the founder and managing partner of the Hanini Group, a development company with an affiliated architecture firm, Brick Design, and a construction management firm, Hanini Construction. We are talking about the Peoples Bank Building, his recently completed 120,000-square-foot mixed-use building in downtown Passaic, New Jersey. This historic landmark was built in 1931. After standing empty for nearly 30 years, it was completely renovated to include both retail and office. For this project, Samer and his team served as developer and designer as well as construction manager.

1:27 – I want to turn the clock back to 1990 when you were a recent graduate of the New Jersey Institute of Technology. You and your brother Thafer decided to purchase a building shell by auction. By all estimates, you both were crazy. Could you talk about that very first project as a developer and why you decided to make that leap?

5:03 – How did your hands-on experience on that first project influence the subsequent projects you decided to pursue?

6:13 – You have become known as an expert in historic rehabilitations and the incentives that drive them. What are some of the skills that are necessary to succeed in this subset of redevelopment as opposed to new construction?

9:42 – The 12-story Peoples Bank Building was constructed in the depths of the Great Depression. In subsequent years, it bore witness to Passaic’s rise as an industrial city. It was and still is the tallest building in the city and can be seen from miles away. What were your first impressions of the building?

13:39 – With this building having been empty for two decades what was some of the damage that you needed to address because of the abandonment?

19:44 – This project had a unique set of challenges including engineering, architecture, and financing, all set within the urban context of the city of Passaic. What was that thought process for going through and understanding the returns for a project like this? Did you start thinking through how to tackle the challenges associated with the property early on or were they worked through over a longer period of time?

24:55 – What are UEZ Grants and what are the benefits of this program?

28:40 – The building is also eligible for tax credits, which are a federal vehicle to raise equity or debt in the form of credits on future income tax obligations. Could you talk about Historic Tax Credits and how they applied to the project. Similarly, could you explain what New Market Tax Credits are about and how they benefited the project?

34:54 – Incentives like these can be taken too far [cough, “Amazon”]. When is enough enough, and when do you think a line has been crossed between a necessity and windfall for a developer?

40:58 – As the developer for this project as well as the designer and construction manager, how did having control over those three roles benefit you in the development process?

42:20 – Your team includes your brothers Thafer and Amer. Could you talk about how you split responsibilities on this project?

43:41 – A number of your tenants have made commitments to hiring locally. For example, the entire staff of Blink Fitness lives locally in Passaic. How do you see this community-minded approach being part of your entire business process?

45:35 – “Eyes on the street” is a planning idea that foot traffic is a deterrent to crime. Blink Fitness opens as early as 5 a.m. Mama Sushi closes as late as 3 a.m. There is a constant flow of people through the building. From your perspective, having been there before the project started and being there after it has been completed, do you see a visible change in the physical environment by having this building be occupied instead of empty?

47:53 – The lights are on. The landmark clock is working. This is essentially the beginning of a new era of development for Passaic, and the end of your five-year adventure as developer, architect, and construction manager. Where do you place this project in the arc of your personal career?

51:21 – When you started out in Newark, it was a time when there wasn’t a lot going on in but there was a lot of potential. Did you have particular role models or mentors, or were their team relationships that helped you build the knowledge you now have?

53:35 – Given your background in architecture, how hands-on and sleeves-rolled-up are you in the design process?

Subscribe to receive information about upcoming episodes for the American Building podcast series.

By submitting this form, you are consenting to receive marketing emails from: MGA&D, 341 Nassau Street, Princeton, NJ, 08540, US, http://www.michaelgraves.com. You can revoke your consent to receive emails at any time by using the SafeUnsubscribe® link, found at the bottom of every email. Emails are serviced by Constant Contact.

Back to All Episodes