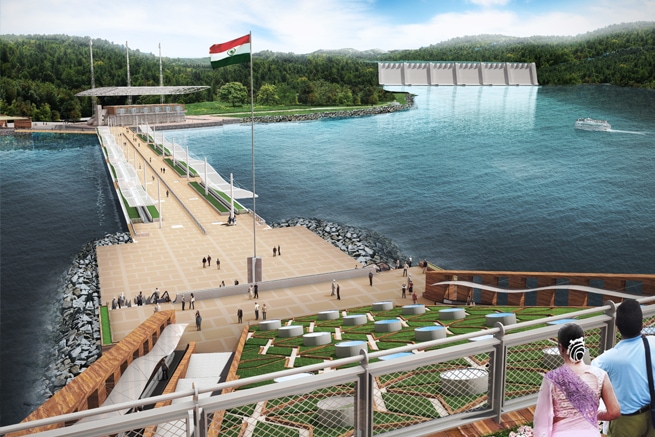 Since its ground breaking 36 months ago, progress on the record-breaking Statue of Unity project has made significant headway as site work, infrastructure and construction of the monument itself have all taken shape. MGA&D, the Design Architect and member of a multi-firm consortium tasked with delivering the project, is responsible for design and construction oversight of what will be, when completed, the tallest statue in the world – The 182 meter tall Statue of Unity. The statue is being built at the Sadhu-Bet Island, approximately 3.5 km south of Sardar Sarovar Dam in the Narmada district of Gujarat, India. A significant portion of the project entailed engineering and significantly reinforcing this rocky outcrop in the middle of the Naramada river bed in order to accommodate the massive sculpture and the base on which it sits which will, when complete house visitor services, and a series of display halls dedicated to Saradar Patel, the history of India’s struggle for and ultimate achievement of independence, and the construction of the statue itself. Of note is that Sadhu-Bet Island is not currently an island; it was an island prior to the construction of the Sardar Sarovar Dam, upstream some 3.5 km from the site of the Statue, and it will be returned to its island state via the construction of a downstream weir that will serve to aid in the control of the flow of the river and provide the 6 m rise in the waters of the river to submerge enough of the river bed to make the island a true island once again. 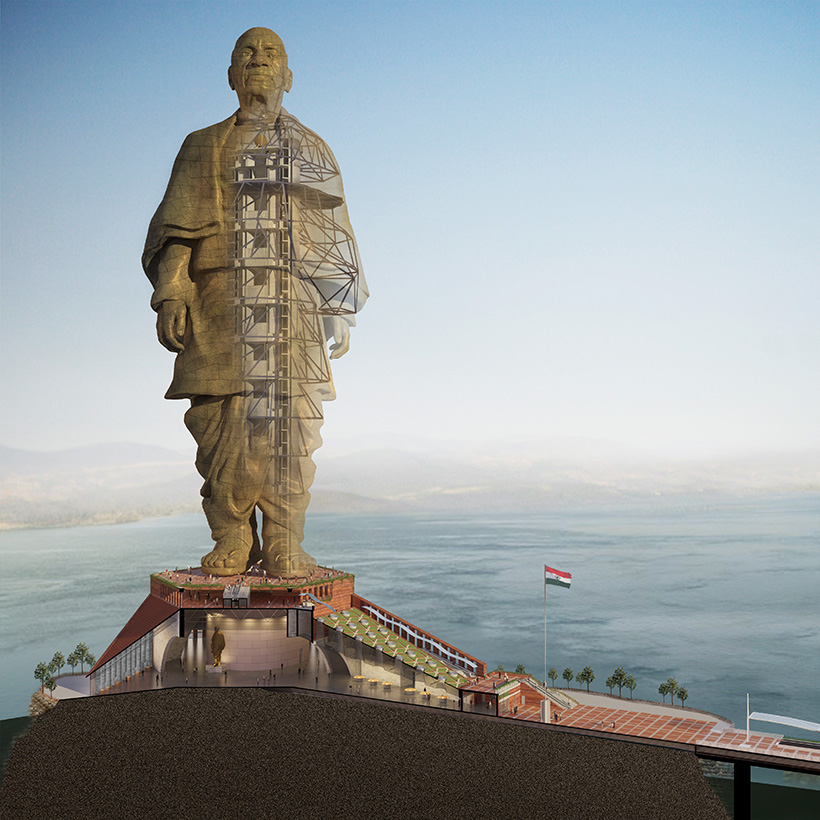 Rising waters, are in fact, a superb metaphor to the life and work of Vallabhbai Patel, in whose likeness the statue has been formed, and to whom its construction is dedicated. Vallabhbhai “Sardar” Patel was a prominent statesmen and social leader best known for his role in India’s struggle for independence and the state-building effort that followed. Sardar Patel grew up in the countryside of Gujurat State, first practicing law prior to becoming one of the preeminent political and social leaders in India’s history. It is in reverence to the immeasurable contributions of Patel that Prime Minister, Nahendra Modi has spearheaded the effort to erect the monument to the man and his accomplishments. 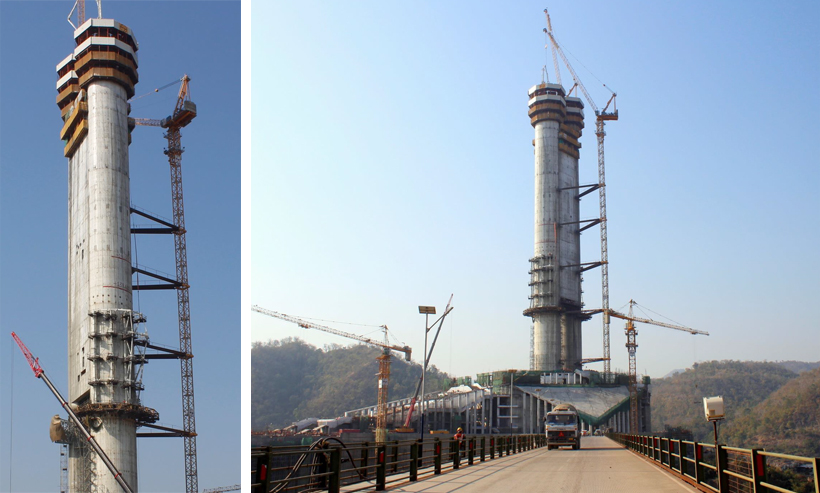 Pictured above is the primary steel erection that serves as the core access within the statue.

In addition to the statue itself, MGA&D designed the master plan for the entire project, including the phased development of a hotel, convention center, memorial garden, visitor’s center, a quarter mile long bridge connecting the visitor center to Sadhu Island and the statue, and miles of roadways and bridges that connect the statue to the town of Kevadia. 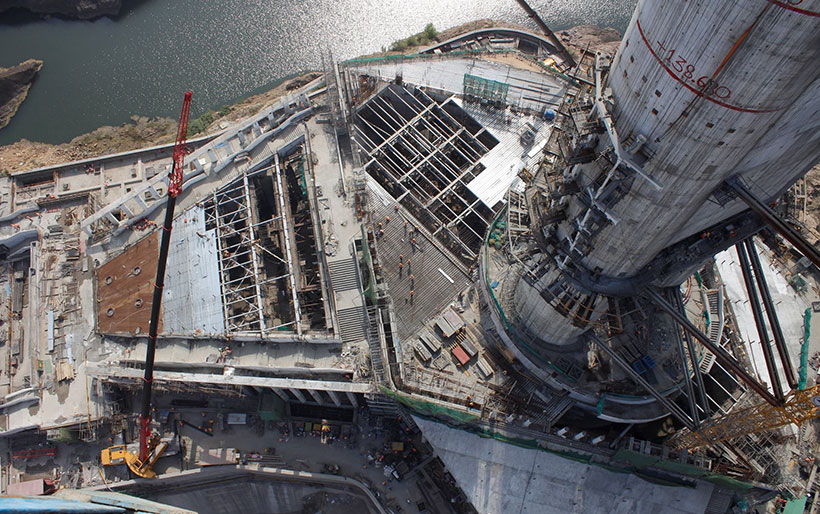 Birdseye view of progress to the Statue of Unity construction.

After a much-anticipated completion of the foundation and reinforcement of the Sadhu Island rocky outcrop, the full silhouette of the statue is taking shape. Once completed, it is anticipated that The Statue of Unity will become a highly sought and prominent travel destination for both domestic and international audiences. The project will provide an engaging and memorable experience which will include architectural and experiential features such as a visitor’s center with cable suspended stretched skin canopy, interactive museum, expansive food and beverage market and a breathtaking viewing deck 160 meters above the waters of the Narmada River. A notable construction milestone has been reached in the completion of internal twin concrete cores, thus meaning the main structural support is now complete. The twin cores will serve as both primary vertical circulation and structural support. Completion of this work has paved the way for commencement of the erection of secondary structural steel scaffolding which will serve as the support system for the individual bronze panels. 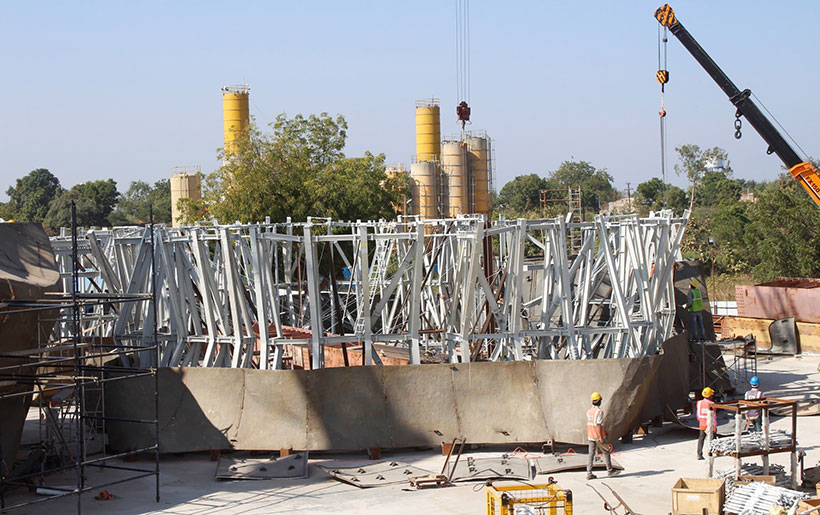 The broze cladding process has begun.
Artist and sculpture, Ram V. Sutar, first modeled the Statue of Unity as a 30-foot tall “miniature” version in his workshop. From this model a full-size digital model of the sculpture was realized, an intensive process of translation which required the skilled hand and eye of sculptors and fabricators well-versed in the manufacture of massive statuary. This model was then divide into roughly equal sized to form the outer “skin” of the 466-foot tall statue. The exterior of the statue will consist of a series of cast bronze segments called micro-panels. The micro panels are arranged in a series of rings that are supported on the structural steel scaffolding that will be hung from the internal twin concrete cores. These rings are first tested for fit at a nearby mock up area; they are first assembled on the ground to form a complete ring (as seen in the image below) to allow workers to make final adjustments prior to craning the pieces into place. Once the section is measured, adjusted and approved, the panels are separated into manageable sections and lifted one by one into place. Documented here is the erection and final placement and installation of the first micro-panel. 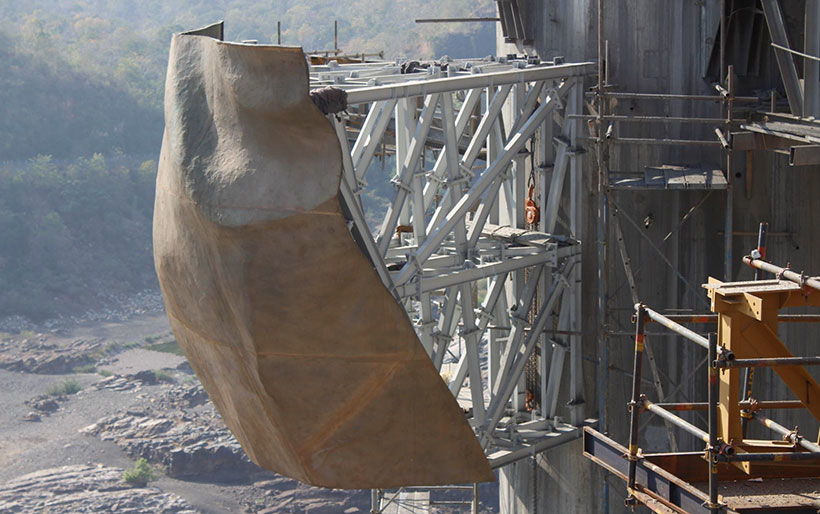 The final placement and installation of the first micro-panel.

The primary viewing area will be located in the chest of the statue, providing not only panoramic views, but the opportunity for visitors to experience and explore the internal structure of the statue and to witness first-hand the detailing of the micro panels and their assembly. The observation deck and will provide sweeping, picturesque views of the nearby Sardar Sarovar Dam, Narmada River, as well as the lush Shoolpaneshwar Wildlife Sanctuary that surrounds the site and extends for miles around. We look forward to watching the statue develop and take form as the final portions of construction are finished. The Statue of Unity is scheduled to be completed in 2018, we are eagerly anticipating the final product.